Competition between cloud storage firms has never been fiercer, with BOX, Dropbox, Evernote, Google, Microsoft and others in a virtual arms race to outdo each other on features and capacity-per-dollar.

Microsoft has been bundling 1,000GB of free OneDrive storage with Office 365 while BOX has launched local Australian cloud storage in a pitch to CIOs with strong data sovereignty requirements.

Worldwide, revenue from cloud storage was forecast to be $US18.87B ($AUD24.9B) in 2015 and estimated to reach up to $US67B ($AUD88.41B) by 2022 according to analyst Research and Markets. Much of the current spend is from personal users who have flocked to the convenience of online backup and file sync between work and home computers and mobile devices, but increasingly business is turning to cloud storage solutions as well.

Like many trends in tech, the viral popularity of these services has ended up driving workplace IT decisions. Managers that were once tentative about storing data outside of the control of company servers are now rapidly adopting cloud storage due to the unarguable cost advantage and the simple reality that staff members are using the services regardless of the IT team’s view.

The research commissioned by Brother revealed that use of online document management systems in Australian SMBs is set to grow by 100% in the next 12-18 months, while both free and paid cloud storage take-up is expected to triple.

The printing and imaging company is now among the world’s market leaders in integration of cloud storage services in its new corporate-grade printers, with direct on-printer integration with BOX, Dropbox, Evernote, Google Drive and OneDrive.

This is coupled with Near Field Communication (NFC) card-reader integration on the printers, allowing individual staff members to automatically set up their own user profiles on the printers with a tap of their staff ID card on the printer. This allows staff members to have their own cloud services profiles, avoiding the potentially embarrassing problem of documents being scanned into someone else’s cloud account, or printing others’ files.

The ‘paperless office’ mooted in the 80s and 90s never quite eventuated – there are still plenty of printed documents in most offices. But that doesn’t mean the way companies handle documents isn’t changing.

Postal mail is in terminal decline with invoices by email now the norm, and both offices – and employees – are less inclined to physically file paper documents as management seeks to get better productivity out of each square metre of office floor space.

Getting printed documents into digital repositories efficiently is a high priority for Australian SMBs, GfK’s research found. Two thirds of companies said they were looking to implement an online document management system in the coming year. This recognises that while paper’s not going away any time soon, managing it digitally has clear cost benefits – and not just as unsorted ‘digital dumping grounds’.

Brother’s new range of printers for small to medium business can be integrated with a number of leading document management solutions, such as Docstar’s Doculex Archive Studio. Brother’s value added system integrator partners can set up the printers to send scanned documents to a cloud service for automatic OCR conversion to searchable text and then be automatically filed in Doculex according to rules that can be defined.

Scanning to the cloud need not be tied to just a few printers in the office though – Brother also has a range of stand-alone, networked high speed scanners that can scan up to 80 double-sided pages per minute. These scanners can scan directly to Sharepoint-based document management systems, along with the same cloud storage services supported by the corporate printer range.

Team members working off-site can also use Brother’s cloud services integration to print documents back at the office for actioning by colleagues or review upon return, freeing staff from the need to be connected directly to the company LAN in order to print. 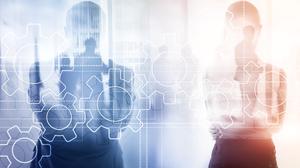